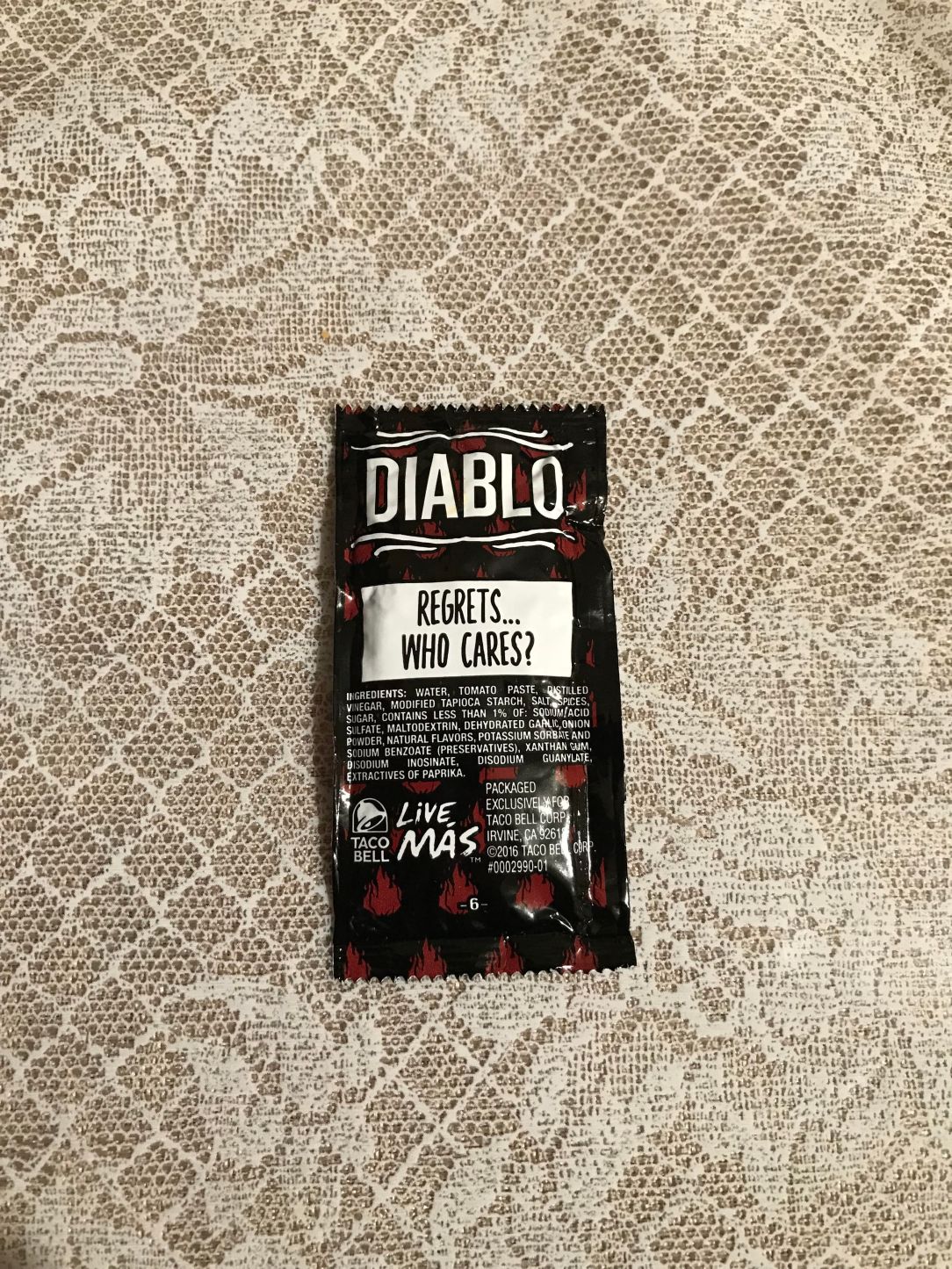 The Taste of Hellfire

Truly, you are mistaken, O Diablo Sauce, chiefest and greatest of calamities.

By unholyephraim in Food & Drink, Opinion on October 22, 2017
No comments

I enjoy spicy foods, sauces, and condiments. To my great misfortune, my gastrointestinal tract does not. At least, not any longer in the quantities of my juvenescence. For decades (about two), I luxuriated in the euphoric and divine burn that only capsaicin could deliver. I would often compete with friends to see who could endure the fieriest wings, very much to the chagrin of our porcelain commodes.

As I grew more adventurous, I dabbled in illicit sauces whose burn rivaled dragonfire. The kind of sauce which necessitates protective gear just to handle safely, perilously bordering on the verge of corrosive. A sauce that evokes images of smoldering porcelain. Even xenomorph blood seems benign in comparison. In retrospect: what the fuck was I thinking? Certainly, anyone who saw a skull and crossbones would think twice (or thrice) before drizzling it on food, right? I mean, one product was called Mega Death as if ordinary death were woefully insufficient. (I’m suddenly reminded of the line from The Mummy: “Death is only the beginning.”) Could that thick, caustic ooze contained therein be accurately described as a sauce?

The latter question overtook me the other day during an otherwise pleasant encounter with Taco Bell. Just as one’s thoughts and ideas mature and improve, so, too, did my taste buds evolve. I began to appreciate the various tastes and subtleties of different hot sauces, not just the heat. (Insert Food Network superlatives here.) So when I learned Taco Bell had Diablo Sauce, I was struck with a pang of nostalgia… and heartburn. I hadn’t tried it during its initial run. I thought to myself, ‘why not? A little won’t hurt.’ For all the warmth and pleasantness nostalgia may bring, often those reminiscences are best left in the past.

I spread a packet of Diablo Sauce upon what was an otherwise perfectly good soft taco supreme. The first bite was heinous. Absolutely heinous. The second expanded the criminality of the first. And each bite thereafter was exquisitely painful, not for lack of spiciness (which, by the way, didn’t evoke imagines of the underworld or flames or the Prince of Darkness), but for the absence of enjoyable flavors. Of any kind.